WASP as a possible betting tool

Recently I published a detailed article about the cricket WASP giving my thoughts on the tool, how it works, and why I thought it was largely useless from a betting perspective.

Of course, it was never intended to be a betting tool, and I was delighted that WASP co-creator Dr Seamus Hogan saw fit to comment on the piece, clarify some issues - and agree he would not use it to bet either! Please do add your own thoughts to the discussion at the bottom of that piece.

While writing that article I did mention that, despite my overall reservations about WASP, there were certain limited circumstances in which I thought cricket traders could benefit from its outputs.

In this post I'll outline these circumstances, explain how I believe WASP can be used profitably, and illustrate how you can easily do this yourself.

A quick refresher on WASP

Before diving into the trading technique a quick reminder of some of the main characteristics of WASP is needed.

Firstly, WASP stands for Winning and Score Predictor. It aims to do two things in a cricket match:

WASP does this by referencing historical matches to compute the likely outcomes.

Importantly, and the root of much of the criticism WASP endures, is it assumes an average team is playing an average team. Of course, not all teams are average.

In this article I'll concentrate on the the 2nd WASP output - the probability of the bat second team winning - and how traders could profit from it.

Ironically, as noted in my previous article, it's the output that receives most criticism, but is also the one that, with the right conditions, could perhaps be the most useful.

So what are the right conditions?

How? Easy! Average teams do sometimes play each other. And when they do,  all of sudden, we can pay more attention to the WASP prediction. Put simply its outputs have more relevance.

Whatsmore, if the original par score used to calibrate WASP was sensible, and, with the hindsight of watching the first innings, we can see it was also pretty accurate, then this is another big positive for WASP.

Especially if the bat first team more or less made that par score. Combine all these elements together and suddenly WASP is in its element.

How can we use this to our advantage?

Ok, there are a fair amount of caveats there. But the match situations outlined above do crop up. Which means WASP can sometimes be useful from a betting perspective. So how can we make use of it?

Below is one of my graphs that gave me the idea for this article. It's a model I use in my own betting that gives me a probability of the bat second team winning in Twenty20 matches once the second innings has started. 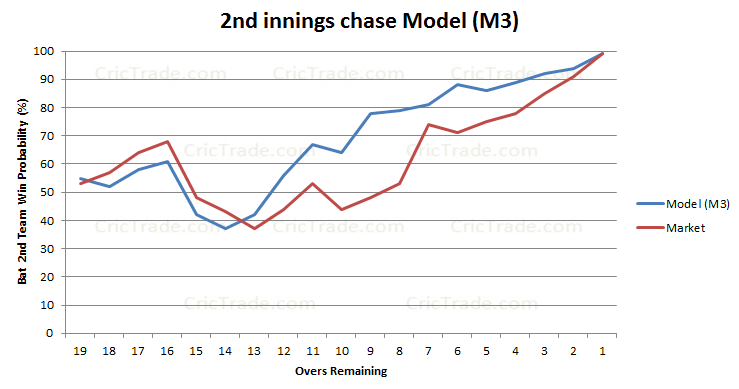 I'm not going to reveal anything else about the model other than to say I cheated and was rather chuffed when I first came up with the idea a few years back. :-) It's by no means perfect. But sometimes helps increase my profitability.

I'll also say that the data in the graph is not from a real match. I've simply inputted some numbers to help illustrate the point.

Real example or made up data matters not though. The key is what the graph tells us. And here we can see that after 6 or so overs of the chase the model starts to favour the chasing team more than the market.

Now in real life trading situations I rarely rely on a single data point in this model to place a bet. However, I do pay attention to the gap between the two predictive lines. And I especially pay attention when my model line crosses the market line.

I like to think of it, if the model is correct, as being a step or two ahead of the market. Highlighting value in-running in the match odds market.

I use the model as a pointer to which way the market might start to move as a fuller realisation of the match situation sinks in to more and more market participants causing the price to shift accordingly.

What's this got to do with WASP? How can I benefit?

Simple. You don't need my model. You've got WASP! And if we assume the right match set up, as outlined above, you'll be doing pretty damned well if you can out-model WASP, in its element, yourself.

So all you have to do is, at the end of each over, record the market price for the bat 2nd team, convert it to probability, and then check the tv screen and record the WASP probability. That's a 5 second job.

Then simply put the two probabilities into excel and hey presto, you have yourself a graph like mine above. But with WASP doing your modelling for you.

Naturally you'll want to proceed with caution. But if you do this in the applicable match situations as outlined above you should have a tool that will not only give a visual aid of what direction the market might move in, but also suggest entry and exit points too.

And that is a tool worth 10 minutes of anyone's time to build!

As outlined in my previous article WASP will, in general, cost you the shirt off your back if you use it as a basis to bet. It is certainly not a tool you generally want to be relying on to place bets with.

But in certain circumstances, as outlined above, when it can be argued WASP is in its element, I'd argue it can be of use to traders.

Clearly, when you judge the conditions are right to use it, you would want to tread carefully until you were comfortable with both the volatility of WASP and your interpretation of its predictions as they build over by over.

Naturally, all other match details and factors would, as ever, have to form part of any trading decision too.

Ultimately edges are edges though. Situations will arise when WASP will suggest a trade or back up your own view. This may lead to new, earlier or stronger positions. And, if correct, will add to your profitability. Or help reduce potential losses.

You might only be able to use such a tool a small percentage of the time. But anyone with the most basic understanding of excel can easily build this. And any competent trader should be able to benefit from it.
Published at 12:38