Today I'm posting a fascinating video lecture on how economics can help cricket teams win matches. Don't let the subject scare you - it really is worth the time to watch!

Among the absorbing insights in the video are why:

* Stephen Fleming was a smarter power play batsman than Sachin Tendulkar
* If you have two bats left you are better off with 10 and 11 than a top order bat and 11
* A team not batting out its overs in limited cricket is not "the biggest sin"
* Teams play sub-optimally, both without realising it and deliberately
* Commentators and the press contribute to sub-optimal play

These are not my words and thoughts, but those of Dr Seamus Hogan, a co-creator of the cricket WASP, self-proclaimed "cricket tragic" and the man giving the lecture.

If that hasn't pulled you in a couple of screen shots from the lecture too before I post the video at the bottom of this article. 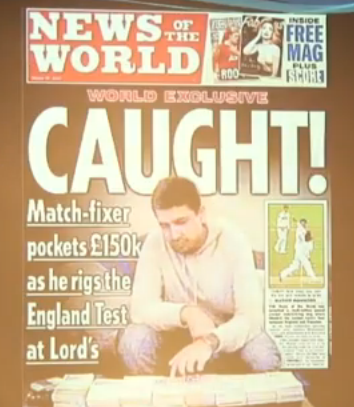 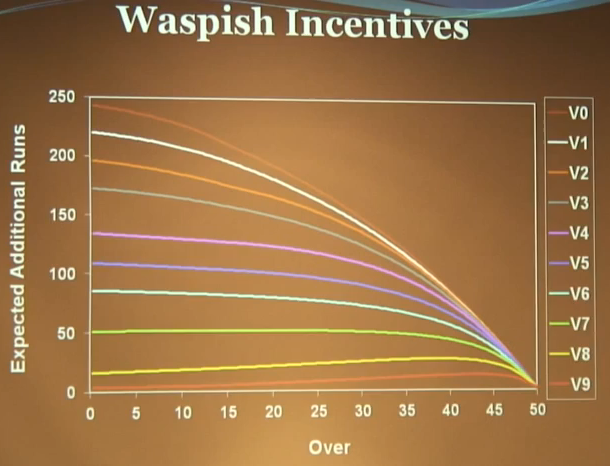 That economics can help a cricket team win matches does not surprise me at all.  I've long been of the view that cricket teams would benefit from the input of experienced cricket traders. It's never going to happen of course - a punter hanging around any cricket team should even manage to set off alarm bells at the ICC.

But think about it. A full-time cricket trader of several years standing has watched many more limited over cricket matches than any time-hardened old pro has watched or played in combined. Or any coach.

And not only has that trader seen more games, but he has watched live markets measuring the probability of a team winning, has learned what effects those markets, how and why.

He's also seen the same situations crop up time after time and knows the on field decisions he wants taken when betting on a match to increase his chance of winning. In other words, he could tell a team how to improve its chances of winning.

And just as a trader can help a team win a cricket match Dr Hogan shows how economics can do the same.

He argues convincingly how economics can improve strategy in cricket. If it sounds crazy there is some simple proof in this article. And there are plenty  more examples in the lecture.

So it starts off a little slow, both during a few minutes introduction by someone else, and in the early stages of Dr Hogan's presentation itself.

But stick with it, even it appears to go off at tangents with graphs to start with, as by the end it is all pulled together nicely with some surprising conclusions.

And there's a salutary lesson in there too about sub optimal risk taking in cricket leading to bad results that Brendon McCullum seems to have taken to heart but that was evidently deleted from Alastair Cook's inbox. (Declaration targets, *cough*)

Please do add your comments below. I'd love to know reader's thoughts on this lecture:

Note: The intro lasts until about 3.50, and the real cricket side of stuff starts around 15:40 (but it will help a lot to have watched the initial economics explanation) From there the discussion gets faster as several areas involving cricket strategy are examined and the conclusions are drawn.