I've discussed my cricket match betting preparation and the benefits of stats before but have received an email asking for more detail about what stats I collect, how I use them and what I mean by ground profiling.

I thought it would make an interesting blog post so will answer below. It's great to get both questions and feedback by the way so please do feel free to email, leave comments at the bottom of posts and say hi on Twitter.

Previously I've mentioned I keep my own database and focus on stats that will give me edges to beat markets rather than stats that are of more general interest to a cricket enthusiast.

I use these stats to draw up ground profiles - in which I try to identify key features and characteristics of matches at the venue I am preparing to bet on.

The stats I keep can generally be broken into two categories. There is an over lap but essentially they are those that profile a ground to help with:

1) Ante-post side market bets such as Total 6s, Multi 4s and Total boundaries.
2) In-running judgements on how teams are doing and what the result might be.

Today I'll look at the ante-post stats and how I use them. On which my starting point is always this table:

So here are a bunch of stats for Twenty 20 matches at the Adelaide Oval. I've removed the more proprietary stats I've developed but left enough of the basic ones to give a good enough indication of what I'm looking at.

So the colours are a visual aide with deep red indicating very low and dark green very high with a gradient of light reds, oranges, yellows and light greens in between.

The table is filterable in several ways such as by date or whether a game is day or day night. The stats showing are simply for all full Twenty 20 games at the Adelaide Oval.

So when preparing for a game I can immediately determine whether I think a ground has a history of favouring bat over ball or vice versa. And have further areas of interest, generally the redder and greener cells, to examine.

Looking at the table the first area of interest is the high 1st 6 overs but only a relatively average 1st innings runs score. This would lead me to the following graph to see what is going on. 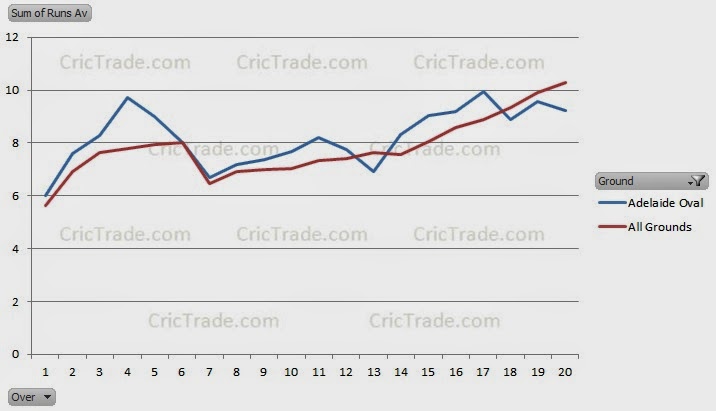 I'm not going to discuss this chart in detail now as I have already in this article - and explained how I would use this to my advantage.

Another area to note from the table is wides and multi wides are returning high values at the ground. There's multiple reasons for why this can be but the first thing I'd check for is if they generally go high, or if there are a couple of very high results that skew the results.

This would suggest to me if it was best to take on the wides markets with fixed odds or with spread betting firms if I liked the lines after taking all relevant factors into account.

The table also shows that, at grounds where there have been 10 or more full Twenty20 matches, the Adelaide Oval is one of roughly a third where a T20 century has never been scored.

Moving from standard ante-post bets to those that can be bet on either before or during a match the immediate stand out in the table is the bat first win percentage. It is very high.

So high, in fact,that there are only a handful of grounds around the world with a higher percentage in Twenty 20. The result is something rare indeed - a ground that has, in spread betting terms, a positive bat first supremacy figure.

This can be very persuasive in my decision to open a spread supremacy position, especially after the toss, if the toss has gone the way I wanted it to.

After all, I can also see the bat first supremacy when bat first team wins figure is also high, but the supremacy figure for when the bat 2nd team wins is on the low end.

Once I've formed a general opinion on a ground and found areas of further interest to examine I switch my attention to a table that concentrates on all the relevant individual matches that have been played at a ground.

This includes all the stats for each game at the ground, as well as any notes I might have taken if it was live on television. This new table helps to give a visual guide to any recent trends.

So, for example, if I was considering going overs on a total sixes line I could see if recent games, rather than the ground average, supported this view.

Such analysis can often show marked differences in many areas between older and newer games which can get lost in simple averages. A typical example might be the bat first win percentage in day / night games after new floodlights have been installed.

The final step I take when using stats to consider ante-post bets is to select relevant games at the ground, input the best and worst bookmaker lines and prices and run a value finder tool.

With these stats to hand it's a case of seeing if other match factors such as team news, recent history and weather support a bet.

If they do and I like a fixed odds bet I then simply enter what I think the price should be, apply my favoured Kelly Criterion percentage and try and get on with the books. A similar method is used for spreads.


So that's a little more about what I mean by ground profiling and how I use stats to try to profit from ante-post markets.

It's by no means definitive but I hope it shows why I collect the stats I do, that I have a streamlined set process and why I believe match preparation is so important when it comes to betting on cricket.

I'll take a look at the in-running side of profiling in a later article.
Published at 13:52